10,000 Unique NFTs launched by NFT FC for the Football Fans !

10,000 Unique NFTs launched by NFT FC for the Football Fans !

NFT FC is a collection of 10,000 NFT’s for football fans. NFT FC’s vision is to support young players financially and create content around their journey to making it as a professional. They have partnered with Overtime for their first collaborative NFT project and will be creating a DAO (decentralised autonomous organisation) that aims to make it easier for young players around the world to make it as a professional footballer. This vision is something that is close to their founder’s heart, Finley Hayhurst, who experienced first hand how difficult it can be to make it as a professional footballer. He spent time in England trialling with teams such as Bristol City and Bristol Rovers and found it challenging travelling from Australia to England with little money. Their app will include the ability for people to vote for the players that NFT FC and Overtime will support and also feature NFT’s of these players for holders to invest in.

Their partnership with Overtime will allow the athletes they support from around the world make a name for themselves and get recognised by some of the world’s biggest clubs. Overtime’s expertise in social media and content creation will highlight the journey to making it as a professional. NFT FC will make some partnerships with agencies and coaches around the world to make sure the athletes they’re supporting have the best chance possible to make it to the top. With their holders being able to play an active part of the journey, they will see value from being able to mint “player cards” of these young players with their value increasing along the way.

As a part of NFT FC initial drop, on November 24, they will be releasing 1,000 NFT’s in which every holder who mints will win a free kit. Their total supply of 10,000 will be broken up into mini drops with the second drop taking place on December 15th, releasing 2,000 more. From the 15th of December, and every month leading up to March 15th, they will be releasing more NFT’s to allow Overtime to create content around the players they will be putting forward to the community to vote on.

A percentage of their secondary sales will also be given back to their holders in the form of free merchandise, with intentions to create one of the first blockchain football fan stores. This will involve purchasing an NFT first, with the physical kit being sent to the holder in the same transaction. NFT FC is a community DAO and NFT project for every football fan around the world, with each holder having a direct involvement in allowing young players an easier route to becoming a professional footballer.

– Benefits for holders: Free NFT FC 21 Kit for everybody who mints

-Re evaluate every drop to make sure its the same $ value

-Each 2,000 mini drop we will have players for community to vote on 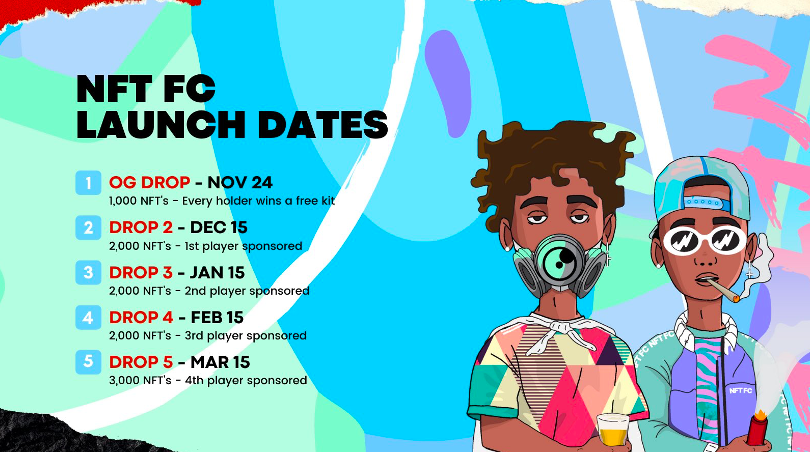 NFT FC is a collection of 10,000 NFT’s for football fans. NFT FC’s vision is to support young players financially and create content around their journey to making it as a professional. We have partnered with Overtime in their first collaborative NFT project and will be creating an app that allows holders to vote on the players they want us to support. As a part of our drop we will be sending out 1,000 free kits to our holders and have plans to release the first blockchain football fan store. A percentage of our secondary sales will also be given back to our holders in the form of free merchandise. Many more future drops are planned that will benefit our holders long term as we aim to partner with professional players around the world.

ULAND is our world remade.