World Crypto Times > Press Release > The First DAO App: What is UTU.ONE and How it works?

The First DAO App: What is UTU.ONE and How it works?

The First DAO App: What is UTU.ONE and How it works?

Press Release
5589
No Comments
Share Tweet Share Share Pin it
What does UTU stand for GOOD NEWS! UTU.ONE new version was released on Dec 23. With version 2.0, we have added many useful features and functionalities to explore, including a new outlook, home page with feeds, reward process improvement, and exclusive private DAO creation. UTU.ONE is the world’s first mobile app that allows anyone to

What does UTU stand for

GOOD NEWS! UTU.ONE new version was released on Dec 23. With version 2.0, we have added many useful features and functionalities to explore, including a new outlook, home page with feeds, reward process improvement, and exclusive private DAO creation.

UTU.ONE is the world’s first mobile app that allows anyone to create their own DAOs and participate in other communities’ success. Its key innovations include a well-designed token economy system that interconnects gated communities, an integrated payment system to facilitate trades using fiat money, a community-owned NFT marketplace and revenue share, and a full suite of DAO governance tools. In addition, the app implements 3D bio verification for user registration and embedded private keys.

You can understand that UTU=DAO + Opensea + Metamask + Uniswap + DeFi + Discord + Twitter. It is an all-in-one place for communities to socialize, interact, contribute, vote, share ideas and interests, hold events with other DAOs, and do anything you can think of.

How to join a DAC

UTU currently has 64 successful DACs with a different number of members and token market capitalization; The number of DACs continues to grow as UTU allows everyone to create their own DACs without asking the purposes. But at the current stage of UTU, each person can only have one DAC, and this is to avoid having a lot of low-quality DACs coming out. 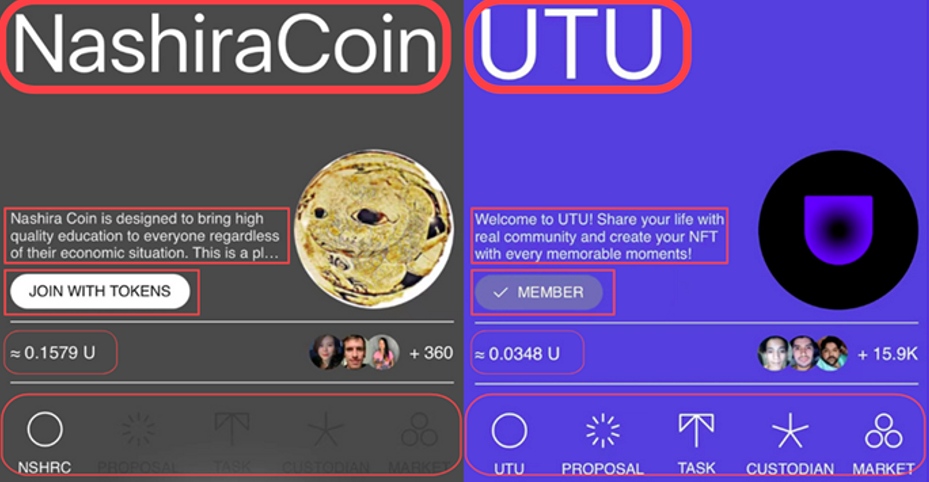 The circled parts show the DAC name, introduction, and function. There will be a “JOIN WITH TOKENS” button to guide you to enter new DACs, click it, then swap any other tokens to this token to join the DAC, or once you receive the token from others, you will become a member of this DAC as well. Briefly compare the two DACs in the above picture; you will see that before becoming a DAC member, only the token information is available (the first option in the functional area). As shown on the left, the buttons for the remaining four functions are grayed out, indicating that the function is only available for members; you do not have access to this information until you become a DAC member.

Click the token name, and you can find the token information such as token price, candlestick chart, total market capitalization, and transactions. All transactions are recorded in real-time and are available for anyone to view. UTU now has 64 DACs, and every DAC has its own token. All tokens are convertible, which means you can swap to any other tokens as long as you have one of them. Once you own DAC tokens, you will become a member of this DAC and can unlock other functions in DAC. 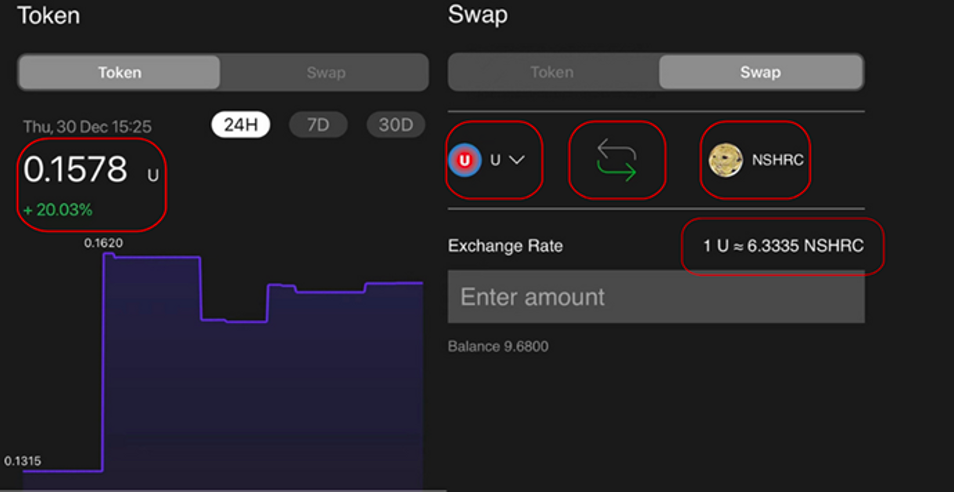 Important asset in UTU – U

Another critical asset in UTU is called U, which is a stable coin pegged to USD. Currently, the only way to obtain U in UTU applications is to purchase the NFT mystery box in the UTU DAC (if you have no other tokens). To buy a mystery box, you need to go to the MARKET function under the UTU DAC and buy your favorite one under the “Buy Now” marketplace list; each mystery box contains the same amount of U as the box price and an NFT collection.

Besides this difference, there is another crucial distinction between them. Under the “Auction” marketplace, all community members can mint NFTs at will, and they can choose their photos or videos to create their own NFTs, making it a free and open marketplace. However, in the “Buy Now” marketplace, only DAC creators or DAC officials can mint NFTs. Instead of minting NFT by themselves, they need to contact UTU’s back-end office, a relatively conservative market. 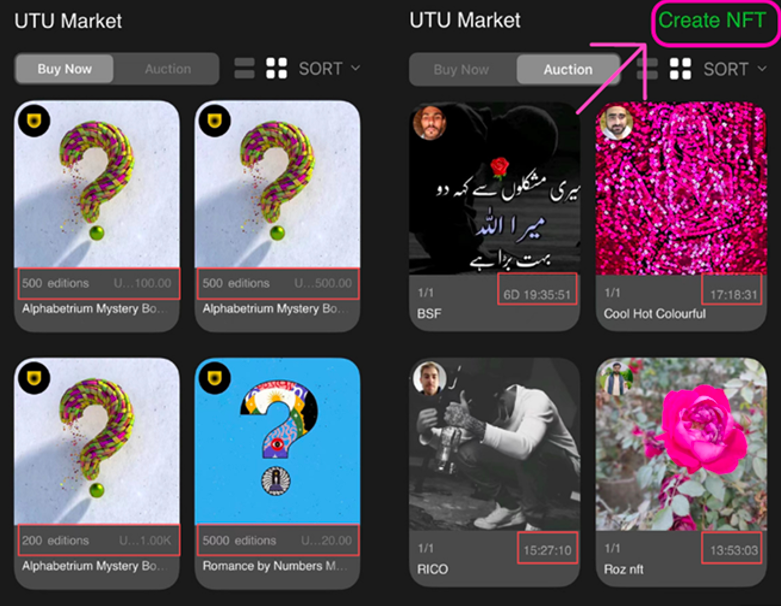 After joining DAC, you can create a post in DAC to communicate with other members, and you can also like and comment on other members’ posts to interact with them. To enter the same community, it may be because you have the same interests or same purpose, and here you can make friends with like-minded people from all over the world. This is also an important part of the layout of UTU.ONE, we aim to scale the benefit of DAOs to the masses and realize the real sharing economy among each user.

Also, each DAC has an important function called “Task” which will be active once you become a member. And there are usually two categories under this function, one is “Daily Task”, and the other is “Community Task”. The difference between these two categories is that daily tasks can be completed every day, while community tasks can only be completed once since entering the DAC. In other words, members can repeatedly receive a certain number of tokens per day by completing daily tasks, but community tasks are one-time, and these token rewards can only be received once. 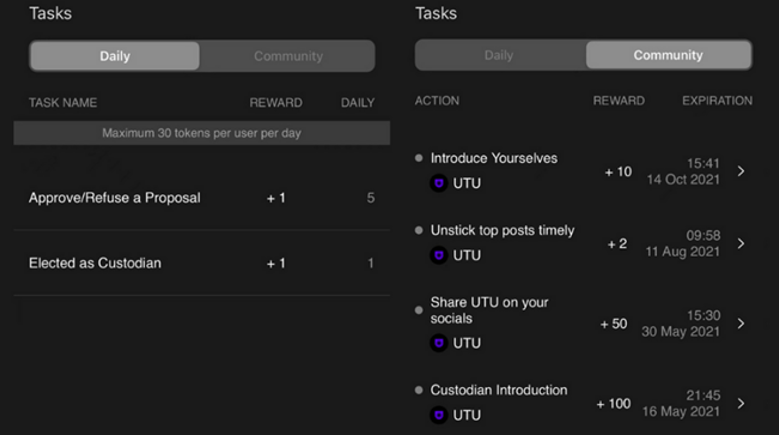 Once you complete the task, you will be rewarded with the tokens, but you need to do one more step actually to deposit them into your wallet. Click on your profile and scroll down to “My Wallet,” where you can see the estimated total token value you currently have and the number of all DAC tokens. Next, click on each token, and you can see the token transaction details. Underneath the estimated value, there is a button called “Income,” click “Income” and you will see that the tokens you have earned from completing tasks in DAC are all stored here; each income corresponds to a different task. Finally, click on “Collect,” and you can easily deposit the tokens earned from completing tasks into your wallet.

KAZANO The currency that changes the market rules of t . . .

8Bit Doge set to release its first batch of NFTs

Silvano Announces Token Sale on P2PB2B For its Innovat . . .

ESCA Introduces a platform that turns your every meal . . .

KAZANO The currency that changes the market rul . . .

8Bit Doge set to release its first batch of NFTs